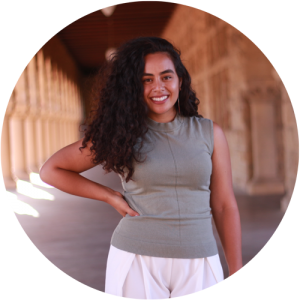 Katlyn is completing her B.A. in communication with a minor in Spanish at Stanford University. In the 2017-2018 academic year, she will be a master's student in the Stanford Journalism Program. Katlyn is interested in education and policy. She has interned in curriculum development and in a program teaching in Tamil Nadu, India. She likes clumsily trying new adventure sports, loves singing at an inappropriate volume and is unabashedly dependent on coffee.

OAKLAND, CA — For Pacific Islanders, a population that is small in the U.S. even for a minority group, the prevalence of domestic assault and abuse is easily overlooked by agencies that serve entire cities or counties.

PENNSYLVANIA — A survey of counties in Pennsylvania, reveals little resources or guidance at the state level to help replace outdated and potentially hackable voting systems.

The cash earnings of Super Bowl winning quarterbacks has varied greatly over the past decade. Seattle Seahawks quarterback Russell Wilson was paid less than $1 million the season his team was crowned champions. Meanwhile, Pittsburgh Steelers quarterback Ben Roethlisberger earned nearly $28 million during the 2008-09 NFL year. The charts account for inflation, however. That is why Roethlisberger’s total compensation is displayed at over $32 million when compared to his counterparts. Nonetheless, this lego visualization helps illustrate the wide earnings margin between players. If a quarterback won twice in the past ten years, their second victory is represented by black legos.

PALO ALTO, CA – Roughly 200,000 Bay Area kids could lose their Medi-Cal health insurance after Congress failed to renew funding for the Children’s Health Insurance Program, according to a report released at the end of October by the California Department of Health Care Services.

SAN JOSE, CA — The Santa Clara Valley Water District has said it will only contribute funds to new water transport tunnels supported by Governor Jerry Brown if the project is scaled down.

Although favor for capital punishment in the U.S. generally aligns with those on the political right, California has now broken from leftist death penalty propositions twice since the death penalty was reinstated in 1978.

Bay Area activists marched in solidarity with the Native Nations March happening on the same day in Washington D.C.