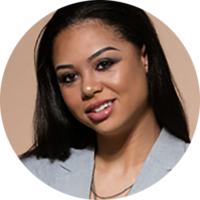 Born in the Bay Area and raised in Philadelphia, Iman Floyd-Carroll draws on her bi-coastal attitude to fortify her principles in seeking to highlight identity, phenomena, and spaces that fall within the margins of mainstream media coverage. A recent graduate of Stanford University, she received her BS in science, technology, and society with a focus in media and communication in June 2020. As an undergraduate, Iman served as the Editor-in-Chief of Stanford’s sole print style and culture publication, MINT Magazine. Under her leadership and desire for an experiential and identity-focused publication, MINT Magazine became Stanford University’s premier student culture publication – her efforts pushing MINT’s readership to 40,000 worldwide in 42 countries. A well-traveled photojournalist, public speaker, and chief administrator for publication affairs: Iman has the “heart of a businesswoman coupled with the intimate vision of a painter.” Under her tenure, MINT Magazine garnered high-profile partnerships with Bloomingdales, Neiman Marcus, LVMH, Samsung, VFILES, and Lancôme, in addition to many others, to create experiential and pre-professional programming for students interested in the intersection of tech, fashion, beauty, and new modes of multimedia storytelling. Self-described as a “universalist”, Iman has worked in multiple creative and administrative roles within fashion, music, design-thinking, and technology. Notably, she has served as a digital and creative consultant for Blavity News, LVMH (via Emilio Pucci), SKULLCANDY, and the Hasso Plattner Institute of Design at Stanford. Within her master’s program, Iman is interested in using VR and AR technologies as a way of mediating epistemological injustice and using emerging technologies to bridge bi-partisan public issues through creating new forms of accessible and empathetic storytelling. 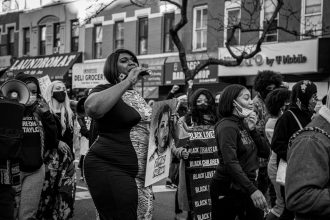 2020 was the most dangerous year in U.S. history for Black trans women. The fight for Black trans liberation continues – every Thursday – at the Stonewall Inn in New York City. 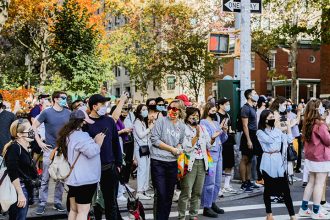 Residents erupted into celebration as the results of the 2020 presidential election were announced: Joseph R. Biden Jr. and Senator Kamala Harris had beat out the divisive incumbent, President Donald J. Trump and Vice President Michael Pence.

As the U.S. copes with economic strife, a global pandemic, and the products of an ideologically divided nation, the 2020 election is a reminder that our nation’s political landscape has markedly shaped individuals’ everyday reality.