In TheatreWorks Silicon Valley’s production of “Little Shop of Horrors,” the creative team is holding a mirror to the Bay Area and encouraging residents to take a deeper look at the reflection displayed.

In a region of California widely known for its ethnic and racial diversity and its sizable immigrant population, this production pays homage to the Bay Area’s background by setting the story in San Francisco’s Chinatown.

“I think that every single person in this world has a story to tell and has an experience that deserves to be heard,” said Lo.

“Little Shop of Horrors” is the story of Seymour, a shop assistant in a flower store and his cultivation of a human-eating plant. As the plant grows, it generates business for the struggling shop, raising the profiles of Seymour and Audrey, the woman he is secretly in love with. As Seymour’s fame and fortune rise, it becomes increasingly clear that he has made a deal with the devil.

In TheatreWorks Silicon Valley’s production, the bones of the story remain in place with additional cultural details like Kikkoman gallon pails, photos of former Giants’ pitcher Tim Lincecum and Mayor Harvey Milk, and maneki-neko, the waving lucky cat. On stage, Audrey and Seymour share bubble tea. In another scene, Seymour and the flower shop owner engage in a traditional Filipino dance.

With this production, Lo hopes to give the Chinatown community and Asian American characters the three-dimensional representation not always afforded them in mainstream films. The cast includes Chinese Americans, Filipino Americans, African Americans, and multiethnic Americans.

Tim Bond, artistic director of TheatreWorks Silicon Valley, spoke to the importance of creating characters with backgrounds that actors can relate to. “African American characters really helped me find, again, my own cultural rhythms and voice and issues and themes that those characters are going through that I could relate to. And so that gave me my truth and my humanity and validated my existence.”

With TheatreWorks Silicon Valley’s other productions this season, more groups are being given the chance to go through a similar experience to Bond’s. This season includes works focusing on intergenerational Jewish family relations through Passover dinners, the life of civil rights activist Fannie Lou Hamer, and others.

When Lo approached Bond with the idea of setting the musical in Chinatown, the artistic director gave it the green light.

Bond believes that the production captures “the zeitgeist,” which means it speaks to the ideas and beliefs that culturally define a certain time period. He elaborated further, saying, “What’s the story you want to tell with this play? And what are the themes and how do they attach to what’s going on right now?”

For Lo, the production is a cautionary tale about greed. The plant’s constant hunger spreads to Seymour who learns to keep reaching for more—more money and more fame, even at the expense of those closest to him. Lo said, “I look at Chinatown as a specific neighborhood in San Francisco that is holding on for dear life to not be gentrified as much as the rest of San Francisco. And they’re fighting tooth and nail to hold onto their culture and their diversity and what makes it such a brilliant community.”

This production of “Little Shop of Horrors” seeks to bring that cultural vitality to the stage through the setting and the inclusion of racially and ethnically diverse actors. Inclusion is a subject that hits close to home for the creative team.

“I barely had the words to describe it back then, and I still really can’t because it kind of feels surreal, kind of feels like a dream, like pinch-me-moment,” said Sumi Yu, the actress who plays Audrey. “I used to hear about ‘Little Shop,’ and I never thought it could be something I could see myself in or have it be set in a culture or community of my own.

”Both Lo, who is Filipino American, and Bond, who is African American, remember the moment they realized that they, too, could be involved in theater.

For Bond, it was when he saw “Raisin,” a work based on “A Raisin in the Sun” by Lorraine Hansberry, which follows a Black family in Chicago. Seeing Travis, the young son in “Raisin,” on stage was a turning point for him.

“I remember just thinking, ‘Wow, I could do that someday. I want to be that kid,’” said Bond. “And seeing an African American actor and character on stage in a family made me feel like, ‘Oh, I have a place on the American stage.’ So that was really pretty transformational for me.”

Now, he keeps a photo of Lorraine Hansberry above his desk in his home office as a guiding light.

Lo’s story begins with a crush. “It’s an embarrassing story for someone who’s made a career of this, but I just had a crush on a girl, and she asked me if I wanted to audition for the play that she was putting on,” he laughs.

As a high school senior, he wrote and directed a play that other students would participate in. This experience, which was his first time writing and directing a play of his own, helped him realize the power and strength of the art form.

Hindsight has helped him recognize the power of representation, having a voice, and creating pieces of art that resonate with actors and audience members alike.

“I knew that whatever I was going to do with myself as a person, I wanted to make sure I did something that was going to make a positive impact in the community around me. And I was never going to do something—be in the arts, or be in theater, be in storytelling—just for the fun of it. That wasn’t going be enough for me.”

For Lo, “Little Shop of Horrors” is meaningful because it combines entertainment, representation, and messaging.

“My compass, my northern star, if you will, is always trying to lead with ‘What is this doing for our community?’” said Lo.

“Little Shop of Horrors” in Chinatown comes at a time of increased anti-Asian hate speech and crime. Anti-Asian hate crimes hit a historic high in 2021 according to a recent study by California State University, San Bernadino’s Center for the Study of Hate and Extremism.

“We, as an Asian American community, have had a really hard time. We’re celebrating our community on stage, so I would hope that even if it’s not a community people can directly relate to, that they celebrate it with us and just enjoy that we get to tell our stories,” said Yu.

Lo wants to create a more inclusive theater scene. “We need to do the heavy lifting of re-inviting, reinvigorating different communities and making sure it’s long term.” The “Little Shop of Horrors” production seeks to do just that.

But until that goal is achieved across more theaters, Bond, Lo, Yu, and the rest of the creative team at TheatreWorks Silicon Valley continue forth. “Little Shop of Horrors” runs through December 31.
After all, the show must go on. 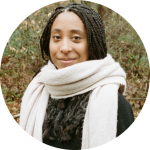 Kalyn Epps graduated from Wake Forest University in 2019 with a double major in Communication and Anthropology. After learning the ins and outs of tech at a public relations agency in San Francisco, she accepted her first Fulbright grant and moved to Santa Cruz de Tenerife. She accepted her second grant and stayed in the islands for another year as the Canarias culture & pedagogy mentor. She loves to read and can usually be found in a library, in a dance class, or outside with her camera.